In a hurry and just want to find out what the best multifilament tennis strings are? Then we recommend the Wilson NXT Comfort String as the winner.

Ask any tennis player and they’ll tell you: the type of strings on your racket can make or break your entire performance. Today, we’ll be helping you find the best multifilament tennis string to up your game when it comes to power, control, comfort.

Not only do multifilament tennis strings excel in these criteria, but they also allow players with tennis elbow or any other arm injury to play without the pain! So let’s not waste any time and get started! 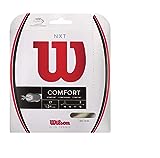 Kicking off our list with a long-established manufacturer of tennis strings, the Wilson NXT Comfort is one of the many strings produced by the company with a stark record on the courts. Comfort is where Wilson NXT seriously shines; it’s what the company highlights as the string’s strongest feature. Similar to natural gut strings, the NXT is super easy on the arms. It doesn’t add strain on the player but still doesn’t affect the playability and response needed for the game While comfort is in the string’s name, power is right on its tail. The Wilson NXT delivers remarkable power via 1600 individual microfibers working together. What we like most about this, however, is that the strings aren’t too dominating. This is a huge plus for players looking to pack extra power in their blows without ending up overhitting the ball. The feel of the string also isn’t compromised by the provided power; it still feels rich and very playable, which makes the NXT a great option for stringing a full bed or creating a hybrid with another string. The Wilson NXT is definitely a string that’s fit for a wide range of tennis players with varying skill levels and styles, but you should know that durability is something that you’ll have to sacrifice with these strings. To extend the lifespan of the Wilson NXT, consider going for the lower gauge size. 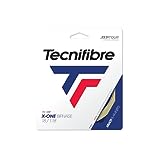 Not all tennis players are blessed with the required strength to crank up the heat of their performance whenever they’d like. So if you’re looking to hit a mightier serve or bigger groundstrokes, the Tecnifibre X-One Biphase is an excellent solution to deliver a natural pop of power to your tennis racket. The X-One Biphase is made with PU400 and Elastyl to offer players more power than ever, rated even higher than the previous record-holder Tecnifibre 515 16L and the runner up Tecnifibre NRG2 SPL 17. In fact, the X-One Biphase boasts power as its star feature to the point that you may need to tweak the tension to achieve balanced control. Luckily, the powerful characteristics don’t really take away from the string’s comfort, which shows in the arm-friendly hitting experience of the X-One Biphase. This string effectively absorbs shocks while reducing the impact on your arm and maintaining the liveliness of the racket. Additionally, the Tecnifibre X-One Biphase provides remarkable touch and feel all around the court, especially at the net. The catch, however, is the topspin you’ll probably encounter with this string because it tends to displace from its original position. This means frequent readjustments will be due. Also, the X-One Biphase can be a bit overpowering, making it somewhat tricky to control the ball. 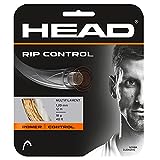 If you’re looking to increase your ability to control the ball as the sport evolves with stronger players and bolder styles of play, then you probably won’t need to look any further beyond the Head Rip Control. This multifilament string can help you avoid overhitting the ball or tone down the power of a stiff frame. It’s as close as you can get to the precision and control of natural gut strings. This can be attributed to the unique construction of the string, combining polypropylene ribbons technology with a multifilament polyamide fiber core. The result is maximum control and playability, along with extra durability and just the right amount of power. Using the Head Rip Control, you can expect a consistent response as the strings remain put in position. This gives players an improved sense of control because they know what to expect with every hit. Moreover, the Head Rip Control provides great topspin, which is another department for you to gain more control over the ball and have confidence that it’s going to drop back into the court after clearing the net. 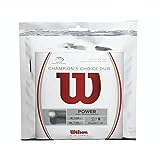 Tennis elbow is one of the most common injuries in the sport, and if you’ve suffered from it yourself, then you probably put comfort-oriented strings on top of your purchase list whenever it’s time for a new set. However, you also don’t want to sacrifice control and power, which is where the Wilson Champion’s Choice Duo comes in! This multifilament string set is a hybrid of two outstanding strings from two highly-established brands, and actually, it’s the choice of the legendary player – Roger Federer. Many players will stop at the name recognition and jump to buy the set, but hey, there’s more to it! The Champion’s Choice Duo includes Wilson’s natural gut and Luxilon ALU Power Rough. This leaves you with a couple of choices: you can use the Luxilon in the mains if you want more control and durability, or you can use the Wilson in the mains if you’re mainly concerned with comfort and playability. The latter configuration is how Roger uses the strings, delivering adequate power without being overbearing. As for comfort, this combination excels in being easy on the arms while offering amazing spin potential so you don’t have to give up either aspect. With natural gut and polyester tennis strings, the Wilson Champion’s Choice Duo brings you the best of both worlds, but you should be ready to spend some hefty cash for it. 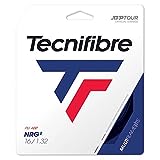 Last but not least, the Tecnifibre NRG2 SPL Tennis String is one of the most frequent strings to be used on professional-level tennis games. This should come as no surprise, after all, the NRG2 SPL is one of the strongest and highest-quality strings you can find on the market. We can evidently see this in the exceptional construction of the string, made with Tecnifibre’s exclusive Elastyl fibers. This translates into a boost of power for the NRG2 SPL by up to 12% more than the conventional synthetic polyamide strings. It also helps that the fibers are bonded together with polyurethane resin for an extra pop. The company goes the extra mile and uses SPL (Silicon Pyrogen Lubritec) as a coating to resist scratches or abrasions. This results in better durability along with minimal notching. You’ll also find the NRG2 SPL rather impressive in terms of playability. The string provides a performance that’s pretty close to what you’d expect from natural gut strings. The dampened feel, arm depth, and excellent balance between power and control work together to give you a unique experience as far as multifilament strings can go. Additionally, the Tecnifibre NRG2 SPL Tennis String is very elastic so it does a great job of reducing vibrations, and consequently, increases the comfort factor for players with arm injuries.

What are Multifilament Tennis Strings?

The strings you can use for your tennis racket are mainly divided into two types: monofilament and multifilament strings. The debate over which one is better is still open among players, so it’s a good idea to brief you on both types for a better understanding of your choice.

These strings, as you can probably tell from the name, are single, solid extrusions of materials. This means that each string is similar to a very small log, but instead of wood, the used material could be nylon or polyester (more durable).

Monofilament strings are quite stiff, which is why they deliver more control as the ball bounces when it comes in contact with the racket.

The drawback, however, is that monofilament strings are very lacking in comfort. They tend to cause extra fatigue to the arms because they don’t efficiently absorb shocks when the ball hits.

On the other hand, multifilament tennis strings are made using thousands of tiny microfibers that are bonded or woven together to create an individual string. This type of tennis strings shares many similar qualities with natural gut, starting from flexibility.

Being highly flexible, multifilament strings are more powerful than monofilament ones, but it comes at the expense of control over the ball as well as the overall durability of the strings.

Multifilament strings also excel in the playability aspect, where most players describe them as having the best feel. This is pretty much thanks to the ability of the strings to absorb the hit of the ball impact while reducing the vibrations traveling through the strings.

As a result, they’re far more comfortable and easy on the arms, allowing for extended periods of play with less strain and trauma on your hands.

How to Choose the Best Multifilament Tennis Strings?

When shopping for the best multifilament tennis strings, you should take the following features into consideration so you can pick the right strings for your needs.

You see, when the ball comes in contact with the racket, the strings are deformed out of place then snap back to their original shape. As the ball sinks into softer strings, the restored energy will be more significant. This means the higher the flexibility, the more the generated power.

Unfortunately, multifilament strings don’t have the best record out there for control. Although they are superior to natural gut in this department, monofilament strings will generally give you better control.

That being said, with the right set of multifilament strings, you can achieve the proper balance between power and control. You just need to find that sweet spot, which usually requires some trial and error.

Arm injuries, such as tennis elbow, are widely common in this sport, which is why players must keep in mind the comfort of the string, not just its power and control.

The more flexible the string, the more it’s capable of absorbing shocks and reducing vibrations that are caused by the impact of the ball. This less the vibrations, the less strain and trauma for the arm.

The gauge of a string refers to its thickness. A higher gauge number indicates a thinner string, while a lower number represents a thicker string.

Thicker strings, on the other hand, are durable and can last for much longer periods, but they’re not very playable. The key is to pick a gauge size that brings about a balance between both sides.

Choosing the best multifilament tennis strings surely isn’t a simple task. However, we’re confident that once you go through our buying guide, you’ll be able to score the perfect string to up your game.

That being said, we recommend the Wilson NXT Comfort String as the overall winner. It combines power and control, along with incredible comfort and outstanding feel.

But if you want something that packs extra power to boost your next serve hit or make up for the lack of strength, then you should consider the Tecnifibre X-One Biphase Tennis String.